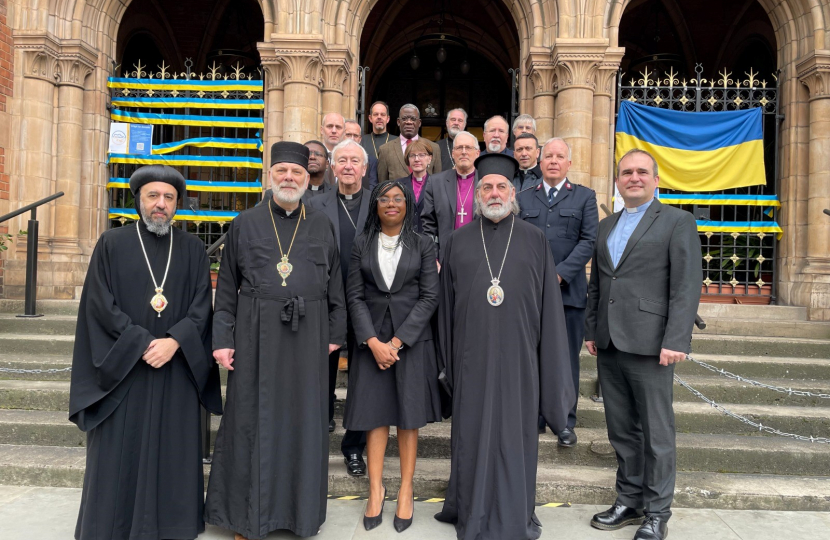 It has been devastating to watch and hear the reports on President Putin’s unprovoked and unjustified invasion. This Government is using all possible means at our disposal in response, including providing a range of economic, humanitarian and defensive assistance to Ukraine and continuing to impose sanctions against Russia and Belarus.

Russia must be isolated by the world, and I welcome the action the Government has taken to do this. In coordination with our international partners, Russia is facing the most severe package of sanctions it has ever faced.

The raft of sanctions includes sanctioning Russia’s Central Bank, banning the Russian State and all Russian companies from raising funds in the UK; freezing the assets of all Russian banks; shutting off Russian banks' access to the global financial system by blocking access to SWIFT; banning Aeroflot, Russia's national airline, and all other Russian commercial and private jets from UK airspace. These measures, and the raft of other sanctions, will devastate the Russian economy.

We are also directly sanctioning President Putin, his Foreign Minister Sergey Lavrov, and his circle of corrupt oligarchs, as well as more than a hundred other individuals and companies. All of their assets in the UK will be frozen, and UK entities will be prevented from engaging with them in the UK and overseas. A travel ban will also be imposed on these individuals.

I know that many Ukrainians have left their homes to seek peace, and I am deeply appreciative of the generous response of constituents, some of whom have offered to welcome Ukrainian refugees into their homes. I fully support the Ukrainian Family Scheme which allows family members of British nationals, UK settled persons and others to come or stay in the UK. Those joining the scheme will be granted leave for three years and will be able to work and access public funds. The scheme is also free and does not include any salary or language requirements.

Ukrainians already in the UK with a visa will also be able to extend their stay by extending their visa or switching to another immigration route, where eligible, even if their visa does not normally allow them to do so.

Today, my colleague Michael Gove announced our sponsorship scheme whereby UK families and residents can offer a home to Ukrainians fleeing the country. Details can be found at: homesforukraine.campaign.gov.uk

Those supporting a family will be able to receive £350 a month towards the cost of supporting refugees. There is no limit on the number of refugees that can be supported through this scheme, and local authorities will be given funding to assist also.

Moreover, the Government is establishing the Local Sponsorship Scheme for Ukraine, which will open up a route to the UK for Ukrainians who may not have family ties with the UK but who are able to match with individuals, charities, businesses, and community groups. There will be no limit on this scheme and the UK will welcome as many Ukrainians who wish to come and have matched sponsors.

Those who come under this scheme will be granted leave for an initial period of 12 months and will be able to work and access public services. I understand that further details on the scheme will be published soon, including information on how people and organisations in the UK can apply to be sponsors.

Further information on these schemes can be found here: https://www.gov.uk/government/news/further-support-for-ukrainians-fleeing-russia-invasion

With regards to the process for visa applications, I have been informed that security and biometrics checks, which are a fundamental part of the UK’s visa approval process at all Visa Application Centres worldwide, will continue to take place at an accelerated pace on all applications. Given the acute security challenges in Ukraine, Russian efforts to infiltrate and merge with Ukrainian forces, the presence of extremists on the ground and Putin’s willingness to use violence on British soil, it is right that the Government continues to protect the public by maintaining these vital checks.

I fully support the resolve of this Government to help the Ukrainian people. Given the rapidly changing nature of the conflict, I am sure that further announcements will be made by the Government over the coming days and weeks.

We must also offer direct support to the Ukrainian people. The UK is providing humanitarian aid on the ground – we have dedicated £220m of humanitarian assistance, to help aid agencies respond to the deteriorating situation, creating a lifeline for Ukrainians with access to basic necessities and medical supplies.

Further, a Humanitarian Assistance Task Force of 1,000 soldiers is at readiness in the UK to support a humanitarian response in the region should it be needed, and humanitarian Teams from the FCDO are also on the ground in neighbouring countries.

On an international level, the UK and Canada has set up the ‘International Ukraine Support Group,’ which will coordinate and devise strategies for the international community to provide Ukraine with humanitarian, economic and defensive military support in the long term.

£74 million has also been given directly to the Ukrainian Government, and this will help them mitigate the financial pressures caused by Russia’s invasion – this could be used, for example, to support public sector salaries, and to allow critical state functions to keep operating. It could also support social safety nets and pensions for the Ukrainian people.

The Government agreed to match up to £25 million of public money donated to the Disasters Emergency Committee (DEC). As of 10 March, DEC have raised over £150 million pounds. To donate to DEC’s campaign, use this link: https://www.dec.org.uk/appeal/ukraine-humanitarian-appeal

For a number of years, the UK has been working with Ukraine to provide support for their security and defence. Through Operation ORBITAL, over 22,000 members of the Ukrainian army have been trained. Additionally, since 2019, the operation assisted Ukraine to build up and sustain a naval capability.

In the months prior to the invasion, the UK provided extra support in the form of 2000 anti-armour missiles, which the Ukrainians are now putting to good use. The UK has sent further military support (lethal aid in the form of defensive weapons, and non-lethal aid such as body armour and helmets) to Ukraine since the invasion.

It is necessary to urge caution with regards to military support, and that is why the UK has not backed a no-fly zone. While I understand the rationale behind a desire for this, I would highlight the words of the Minister for the Armed Forces, James Heappey, in the House of Commons – that such a policy would present too high a risk of miscalculation and escalation that could ultimately lead to the inadvertent triggering of NATO’s Article 5.

With regards to protecting our NATO allies which neighbour Ukraine, UK armed forces are present in Eastern Europe, to deter Russian aggression threatening NATO states. For example, the size of UK armed forces deployed in Estonia has been doubled. We have also deployed Typhoon jets to patrol NATO airspace, and airborne forces will also be sent to patrol the Eastern Mediterranean region.

The conflict has sparked a wave of support across the country and our constituency, for residents who want to make financial donations, donate supplies or find ways to help, please visit: www.gov.uk/government/news/ukraine-what-you-can-do-to-help

Last week, in my capacity as the UK’s faith minister, I met with Bishop Kenneth Nowakowski, Bishop of the Ukrainian Catholic Church and London Church Leaders to show my support for the Ukrainian people. We discussed the role the Christian church can play in welcoming newly arrived Ukrainians in the UK.

My thoughts remain with the Ukrainian people and their president, who defiance, courage and patriotism in the face of foreign aggression is inspiring.